Skip to content
— Derech Ha'avot, Gush Etzion, Neve Daniel, Rosh Tzurim, stabbing, Zionism —
This article was first published on the Times of Israel blog on Friday at http://blogs.timesofisrael.com/derech-haavot-standing-strong-one-footstep-at-a-time/.
Three days ago, Tomer Ditur set out from his home in Rosh Tzurim, in Gush Etzion, to go for a run. He ran along Derech Ha’avot, the Path of the Patriarchs, where so many of us in the Gush run and bike and walk. And while turning around to head back home, in front of Neve Daniel, he was stabbed and left to bleed.
Derech Ha’avot is part of the path that our forefathers and foremothers used to get to the Bet Hamikdash from their homes in the South. It’s the path that Avraham Aveinu took to get from Beer Sheva to Jerusalem. Along the path there is a mikveh, a mikveh that is more than 2000 years old.
Some would say that we should avoid this path; that we should stay within the confines of our yishuvim; that we should be careful.
But some are not us.
Instead, Friday was a collective day of activity on Derech Ha’avot. There were hundreds of people who poured onto the path to walk, bike, run and declare as we must that we are not going anywhere.
That we will not be scared away from the Land, from the places that we frequent all the time, from the way of life that we know.
And we will not be scared away from our most sacred ground.
As my husband and I set out on the path, we saw groups of runners, bikers and walkers. There were kids who were biking the path with their teachers and there was a group of runners who had come from Rosh Tzurim.

A few of them were holding Israeli flags as they ran, and I took pictures of some of them. Only afterwards, when I got home and read through my Facebook feed, did I see that the Rosh Tzurim group was led by…Tomer Ditur.

Stitches and all, he had a flag aloft as he ran the exact path that he ran three days before. This time, he had 70 runners following him and declaring along with him that we will not be deterred.
In the early afternoon, a group of Neve Daniel runners got together to run from our homes to Rosh Tzurim and back. We convinced our 14 year old to go along, and he managed to get a few friends to go as well. They ran with a sign that they placed outside of Rosh Tzurim that showed their support for the community. It was a meaningful and emotional run and I was very proud of my son. 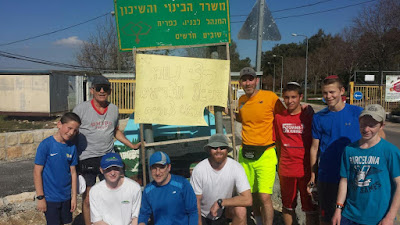 We will not be driven from our homes, our walking paths, our way of life.
We are here. And we welcome our Arab neighbors to come along the path as well, to work their fields and walk along the way as long as they want to do so in peace.
And there was no stronger way to declare that today than with our feet as they pounded the holy earth on our run.